The Cenotaph is a major British war memorial. Standing in Whitehall, London, it was designed by Sir Edwin Lutyens and first unveiled on 19 July 1919. It provided an immediate focus for public grief following the First World War and has remained central to British commemorative events.

In preparation for celebrations to mark the signing of the Treaty of Versailles, Prime Minister David Lloyd George (1863-1945) envisaged a structure in London similar to a temporary "catafalque", a monument honouring the dead, which had been erected beside the Arc de Triomphe in Paris. Lloyd George invited the eminent architect Sir Edwin Lutyens (1869-1944) to create a structure to be built within two weeks. Inspired by the classical Greek kenotaphion, an "empty tomb" to mark absent remains, Lutyens responded that he proposed "not a catafalque but a cenotaph." He sketched a design for the Office of Works the same day.

Initially formed from wood and plaster, the Cenotaph was one of several temporary structures built in the capital for the Peace Day Parade on 19 July 1919, when troops marched past in silent salute before being received at Buckingham Palace. The Cenotaph became the central image of the event and a focus for public expressions of grief. Press commentators lobbied for a permanent replacement and, after Treasury funds and the Whitehall site were secured, Lutyens submitted slightly revised plans.

The permanent Cenotaph was unveiled by George V, King of Great Britain (1865-1936) on 11 November 1920, during the funeral procession for the burial of the Unknown Warrior at Westminster Abbey. Drawing inspiration from classical and Renaissance tombs, the Cenotaph takes the form of a slender pylon supporting a sarcophagus. Despite its simple appearance, the design is careful and subtle, using convex curvatures, based on the classical Greek technique of entasis, to produce the illusion of straight lines. The only alteration to Lutyens’ design was the Cabinet’s insistence on real flags rather than stone banners. Aside from the years MCMXIV (1914) and MCMXIX (1919), the sole inscription was "The Glorious Dead". The genius of its design meant that the Cenotaph was at once inclusive and suggestive, an abstract conception which was profoundly expressive of personal and popular emotions. Within a week more than 1 million people had visited the memorial, and the flowers and wreaths at its base lay several feet deep.

The design inspired hundreds of similar Cenotaphs across Britain and the world. After the Second World War, the London monument was amended with the addition of the dates of the later conflict. This was in accordance with the wishes of Lutyens, who had passed away on New Year’s Day 1944, and on the advice of Sir Fabian Ware (1869-1949), founder of the Imperial (now Commonwealth) War Graves Commission.

The remembrance ceremony held at the Cenotaph in 1921 invented a tradition which continues today. By the time the event was first broadcast live by the BBC in 1928, it had become formalised. Taking place on the Sunday nearest to Armistice Day, the event includes hymns and prayers; a formal wreath-laying led by the royal family, along with military, religious and political leaders; two minutes of silence; and a march-past by veterans and other representative groups. Each subsequent conflict fought by British forces added new generations of military personnel to the procession. 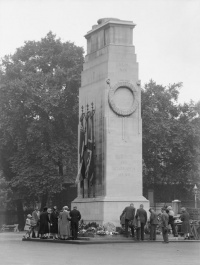 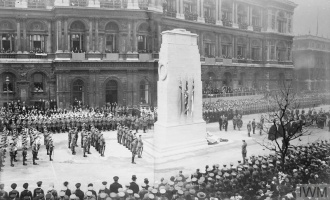 Unveiling of the Cenotaph in 1920, London 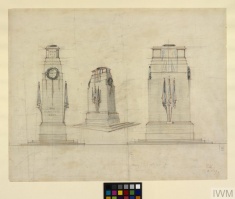 Design plan for the Cenotaph in London