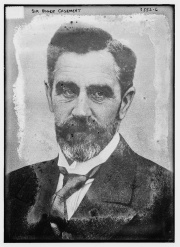 Following a career as British consul and humanitarian investigator, Roger Casement became involved in the Irish nationalist movement and the Irish Volunteers. On the outbreak of war, he sought help in Germany for Irish independence. On learning of the planned Easter Rising in 1916, he returned to Ireland by submarine, was captured, tried, and hanged.

After a career in the British Consular Service, marked by the authorship of two remarkable reports into human rights abuses against indigenous peoples connected with collecting wild rubber, firstly in the Congo Free State (1904) and secondly in the Putumayo region of the Upper Amazon (1910) (for which he was knighted), Roger Casement (1864-1916) became increasingly involved in the affairs of his native Ireland. The years leading up to the outbreak of the First World War were marked in Ireland by tensions surrounding the introduction by the Liberal Government in London of a Home Rule Bill for Ireland. Casement became heavily involved with the Irish Volunteers and helped organise a shipment of arms, the bulk of which landed in Howth in July 1914.

When war was declared in the summer of 1914, Casement was in the United States, where he had gone to collect funds for the Irish Volunteers through Irish-American networks. Believing that Ireland should not sacrifice its manhood in a war against Germany, with which it had no quarrel, and that the war presented an opportunity to secure German support for Irish independence, he determined to travel to Berlin to seek such support. Helped by the advanced nationalist organisation in closest sympathy with the Irish Republican Brotherhood (IRB), Clan na Gael, and its leader John Devoy (1842-1928), Casement left the USA in October and, travelling via Norway, arrived in Berlin on 31 October.

The aims of the mission were fourfold: (i) to elicit the support of the German government for the independence movement in Ireland; (ii) to acquire German arms and officers for an armed rebellion in Ireland; (iii) to establish an Irish Brigade prepared to participate in the Irish struggle by enlisting Irish prisoners-of-war held in Germany; (iv) to inform both German and Irish-American public opinion by propagandist writings.

Following discussions with the German Foreign Office, the first of these aims was partially met by a Declaration on 20 November 1914, approved by the Chancellor, Theobald von Bethmann Hollweg (1856-1921), which stated that “the German Government desires only the welfare of the Irish people, their country and their institutions with whom Germany has no cause to quarrel.” The statement added that, should a German army land in Ireland, it would only desire “national prosperity and freedom” for the people of Ireland.[1]

The attempt to create an Irish Brigade was a failure. Though Irish prisoners-of-war were moved to a special camp in Limburg, only a little over fifty recruits joined the enterprise (these were moved to Zossen, south of Berlin). The overall scheme was ill-conceived from the outset and was further hampered by inter-departmental bureaucracy and Casement’s almost total isolation from both Ireland and the United States. Casement became increasingly disillusioned with Germany and sank into a depressed state. Nevertheless, he continued to produce propaganda material, mostly for the English-language periodical, The Continental American.

Plans for an Irish insurrection at Easter 1916 were made in Ireland and requests for military support from Germany were channeled through the United States. When informed of the plans and of the limited number of German arms being supplied, Casement made his opposition known forcefully, vetoing sending Brigade members to Ireland. Persuading the authorities to send him to Ireland by submarine, he landed on the south-west coast on 21 April, was quickly arrested, whisked to London, tried, found guilty (being stripped of his knighthood), and executed on 3 August 1916.