The Carrier Corps were a conscripted labour force used by all belligerent sides in the First World War in East Africa. The numbers recruited and the subsequent displacement of populations was one of the biggest effects of the war in East Africa.

By the end of the First World War over 10,000,000 Africans had served with the British forces during the East Africa campaign, of whom only 60,000 were combatant troops. The vast majority of Africans involved on the British side were porters who made up the Military Labour Bureau, later renamed the Carrier Corps, of whom no fewer than 95,000 died, or around 10 percent of the total manpower used. The fighting and the harsh conditions these porters endured exacted a heavy toll: almost twice as many porters died as the number of Canadian, Australian and Indian troops who gave their lives during the war combined.

The real danger to the Carrier Corps during the war was not that of being killed in combat but succumbing to disease, exhaustion from carrying heavy loads over long distances, and inadequate medical facilities. By the end of October 1917 there were fewer than 13,000 hospital beds available for carriers, most of which were too far from the front lines to make them reachable by those struck down with malaria, dysentery or pneumonia. This terrible situation was worsened in October 1918 when the "Spanish" influenza reached East Africa, unleashing an epidemic that any form of medicine - Western or African - was unable to combat.

Britain had not fully prepared for a conflict in East Africa and on the outbreak of war in 1914 found itself completely overstretched. Initial attempts to use draught animals to move supplies were hampered by tseste-fly, the carrier of the deadly disease trypanosomiasis, more commonly known as sleeping sickness. In addition, the lack of transportation infrastructure in East Africa hampered the use of these animals, especially during the rainy seasons where the narrow paths would become impassable mud-pools. To overcome this problem in transportation, the British created the Carrier Corps, subjecting human beings to the harsh climatic conditions and the extreme physical pressures of carrying the materiel of the British forces on their backs. Although the use of porters was not new in Eastern African military history, the extent of their use during the East African campaign of the First World War was unprecedented.

Britain recruited the porters that comprised the Carrier Corps not only from its own colonies of Kenya, Nyasaland, Uganda and Northern Rhodesia but also from German and Portuguese East Africa and the Belgian Congo. The displacement during the war and the post-war experiences of these people is one of the least studied aspects of the war, but one that arguably affected more lives than the actual combat in Africa during the conflict.

As a conscripted workforce, the Carrier Corps was not paid anywhere near what would be considered a fair wage for the labour it undertook. The 1915 "Native Followers Recruitment Ordinance" stipulated that the wages for Carrier Corps members would be Rs5 per month including food, rising to Rs6 per month after three months. This derisory wage (a contemporary Mombassa dock worker made around Rs30 a month) meant the Carrier Corps was little more than a press gang justified by the exigencies of war. While certainly coerced to work for the British forces, the fact that porters were paid a wage is one of the few factors preventing us from referring to the Carrier Corps as slave labour. 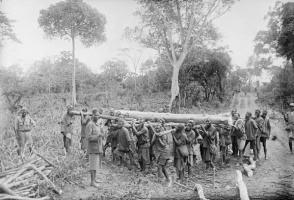 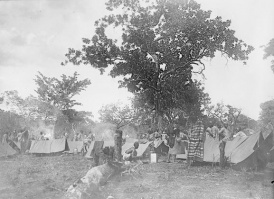 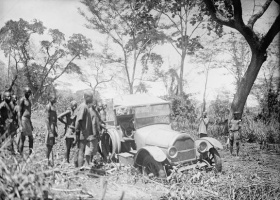 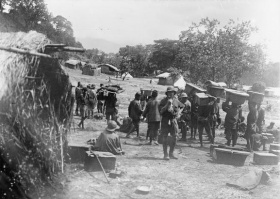