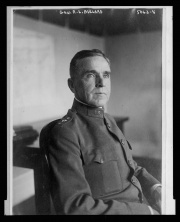 Robert Lee Bullard, born in Alabama and educated at West Point, served in the U.S. Army from 1885–1925. He was in the Geronimo Campaign, the Philippines, Cuba, and on the Mexican border, and he commanded First Division, III Corps and Second Army, AEF, during the First World War. He retired from the military to become president of the National Security League from 1925–1947.

Born William Robert, Bullard (1861-1947) successfully asked his parents to be named for the Confederate Army commander Robert E. Lee (1807-1870) soon after the Civil War. Bullard attended the Alabama Agricultural and Mechanical College in Auburn, Alabama, in 1880, then passed a competitive examination to attend the U.S. Military Academy at West Point. He graduated twenty-seventh out of thirty-nine in the class of 1885.

Bullard posted with the 10th Infantry in Texas and New Mexico, serving in the 1886 Geronimo Campaign. Anxious to climb in rank, he became a model soldier and used his political connections to move to other beneficial assignments. In 1898, he transferred to the Quartermaster Corps as a captain, but took the opportunity provided by the Spanish-American War to serve as a temporary colonel in the 3rd Alabama Infantry (African American). He hoped for combat but the 3rd remained in Alabama.

When the 3rd Alabama disbanded, Bullard secured the colonelcy of the 39th U.S. Volunteers, embarking for the Philippines on 2 November 1899. He saw combat in southern Luzon that continued sporadically while the regiment garrisoned that area.

Bullard feared his career was languishing, so in August 1901 he took a ten-month sick leave. Having married Rose Brabson (1858–1921) on 17 April 1888, he adopted her Catholicism and also successfully lobbied to transfer back into the infantry. This sent him back to the Philippines as a major in the 28th Infantry fighting the Moros on Mindanao. The regiment garrisoned Lake Lanao and constructed the Iligan-to-Marahui Road to demonstrate the benefits of American friendship. Bullard served as governor of the Lake Lanao province from 1903­–1904.

During the Second Cuban Intervention, 1906–1909, the Army assigned Lieutenant Colonel Bullard to the 8th Infantry. He secured a position on the Provisional Governor’s staff and, in his final year, was the secretary of public instruction on the island.

He returned to the U.S. in 1909 where he trained National Guard units and attended the Army War College until the United States became involved in the Mexican Revolution. From August 1915 to March 1917, Bullard commanded the 26th Infantry in the Rio Grande Valley near Brownsville, Texas.

Bullard’s first significant action in France was the Battle of Cantigny, 28–31 May 1918. Taking and holding Cantigny tested the Americans’ organizational and command ability as much as the soldiers’ courage. The complexities of mounting a full-scale attack led Bullard to delay the assault from 16 May to 28 May; the attack caught the Germans during relief, so more enemy troops than expected were in the village. These enemy troops scattered into houses and basements and, because the Americans did not realize they were still there, caused serious problems when the Germans counterattacked. Nevertheless, Bullard’s First Division held, then broke the German resistance, thereby demonstrating the battle worthiness of the AEF. For this success, Bullard received the newly-created Distinguished Service Medal.

Pershing appointed Bullard to command the newly-created III Corps on 8 July 1918. Ten days later the Allies launched the Aisne-Marne campaign. Bullard reported to General Jean Degoutte (1866–1938) of the French 6th Army until 3 August when his headquarters was stable enough to command the 28th and 32nd regiments. The active campaign ended on 6 August, but a stalemate developed along the Vesle River. Bullard's forces barely held the bridgehead village of Fismette, and the Germans were strong enough to prevent pursuit. Nevertheless, Degoutte refused to allow the Americans to evacuate Fismette; he even censured Bullard for attempting to do so. This was the only reprimand Bullard received outside West Point.

A strong German attack on 27 August decimated the Americans at Fismette, but a week later, the Germans withdrew into the Aisne River valley. Bullard’s units pursued, but insufficient coordination with French divisions led to an ineffective overall attack. Meanwhile, Pershing established an independent American Army. He attached III Corps to the U.S. First Army on 8 September 1918, which Field Marshall Ferdinand Foch (1851–1929) assigned to the Meuse-Argonne sector. The First Army faced the German 5th Army dug into a strong position: the Kriemhilde Stellung.[1]

The Meuse-Argonne battle began on 26 September. Although III Corps obtained its first-day objectives, the other units bogged down because of tough terrain, hardy resistance, and severely clogged roads that prevented supplies and artillery from reaching the front. After resting and organizing traffic, First Army resumed its assault. III Corps pierced the final line of Kriemhilde Stellung on 12 October. As the remainder of First Army continued its assault, Bullard transferred to command the Second Army as a lieutenant general.

The Second Army contained six chronically understrength divisions spread thirty miles along the Moselle River. On 5 November, it began raids toward Metz and opened a full assault on the morning of 11 November. When the Armistice began at 11 a.m., all Allied troops halted in position.

Garrisoning his sector until May 1919, Bullard kept the Second Army on a rigorous training and discipline schedule to prevent lapses in morale and behavior. France, Belgium, and Italy decorated him, and the United States awarded him the Distinguished Service Medal.

Bullard returned to the United States in 1919. He took command of the Eastern Department of the Army in October, where he served as a major general until retiring in 1925. His wife, Rose, succumbed to cancer in December 1921, and in August 1927 he married Ella Rieff Wall (1870–1963).

Attractive and well-spoken, Bullard nevertheless found it difficult to fit in to the slow post-war military life and, later, retirement. Pennsylvania Military College recognized his contribution to ongoing Army preparedness by awarding him a doctorate of military science in 1924. In February 1925 Bullard became President of National Security League.

Usually low-key, Bullard participated in two controversies in the interwar years. His 1925 memoir claimed that African American soldiers were inferior to white troops, their military effectiveness impaired by both nature and the politics of the “race question.” Bullard based his generalization on the 92nd Infantry Division’s failure in the Meuse–Argonne offensive. This created a fierce reaction in the popular press. He also participated in the so-called “Battle of the Memoirs,” publishing his American Soldiers Also Fought in 1936. Bullard’s memoir supported Pershing against criticism from Chief of Staff General Peyton March (1864–1955) that the AEF commander acted too independently of the War Department. Bullard also supported Pershing against criticism from Georges Clemenceau (1841–1929) and David Lloyd George (1863–1945) over Pershing’s demand that the AEF act as an independent army.

In all, Bullard wrote three books and many articles for popular magazines and military journals. He continued to serve the National Security League until he died of a stroke in 1947.