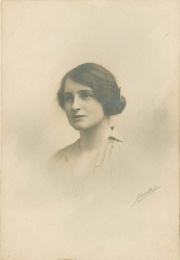 Vera Brittain’s memoir Testament of Youth, and her wartime diary published in 1981 helped to validate women’s experiences of the First World War, and especially the legacy of sorrow that they carried in the aftermath of the war.

Vera Brittain’s (1893-1970) diary, first published in 1981 as Chronicle of Youth, and her memoir, Testament of Youth (1933), show her to have been an ambitious and intellectual young woman, unwilling to follow custom and remain at home in the provincial town of Buxton, Staffordshire, until suitably married. Having worked hard for and gained an Exhibition to Somerville College, Oxford in 1914, she expected to study there with her brother Edward Brittain (1895-1918) and friends, including Roland Leighton (1895-1915), who would later become her fiancé. When war broke out she keenly felt the separation between what she saw as her academic seclusion and passive waiting role as a woman, and the active role in the war her brother and male friends were taking, especially after Leighton went to the front in April 1915. At the end of her first year at Oxford she volunteered as a Voluntary Aid Detachment (VAD) nurse, working first at the local hospital in Buxton and subsequently at the 1st London General Hospital in Camberwell, where Brittain confronted the war in the often terrible wounds of the men she nursed. During this time, her letters to Leighton and her diary show her torn between her rejection of the war and the heightened rhetoric of heroic sacrifice that pervaded the home front. In her later memoir she condemns the war as a cataclysm that made her naive generation victims of political forces outside their control. She espouses the pacifist stance that she adopted after the war, but is unable to interrogate the combatant role played by men such as her brother and Leighton. Yet perhaps because of this contradiction, Testament of Youth spoke for her generation of men and women, struggling in the war’s aftermath to come to terms with the burden they carried and needing an elegy to those who died as well as to the women who survived to face a world defined by those losses.

The War and its Aftermath↑

Brittain’s life during the war was marked by the intense anxiety of having first Leighton and later her brother as well as two close friends in constant danger on the Western Front. The relationship between Brittain and Leighton grew through the letters exchanged while he was at the front and they became engaged during his first leave in August 1915. Leighton died of wounds on 23 December 1915, by poignant coincidence the day before he was due to return home on leave. Brittain’s diary and letters from this period are a moving record of the emotional devastation that came with a death at the front, and her revisiting of it in her memoir expressed the pain her generation had endured from such losses.

Brittain recovered some of her former energy and interest in life when she was sent to nurse in Malta in September 1916. In 1917, at the news of the death of one close friend and the serious wounding of another, Brittain decided to return home. When the friend died of his wounds and Brittain’s brother was sent to France she volunteered to serve there. She nursed through the mass casualties that came with the German offensive in the spring of 1918, and dated the birth of her pacifism from this period, when she cared for wounded German soldiers. At home in July 1918 she received news of her brother’s death on the Italian front. This was the final blow from which she would never recover: later diaries from the 1930s and 40s note the anniversary of his death, and the constant absence of a close brother-sister comradeship.

Carrying the burden of grief and the physical and emotional exhaustion from the war, Brittain returned to Oxford in 1919. But like many combatants, her war experience made her feel alienated from a world that seemed to have forgotten the war. Brittain would never forget, and her pacifism defined much of her life’s work as a writer, public speaker and feminist. The success of Testament of Youth in 1933 and her growing pacifist activism made her a well-known public figure in Britain. When war broke out in 1939 her pacifist stance became increasingly unpopular, but she upheld her ideals, publishing a series of "Letters to Peace Lovers" and denouncing the blanket bombing of German cities. Brittain died in 1970, but the popularity of Testament of Youth endures, bringing to life the intensity and pain of the Great War for subsequent generations.