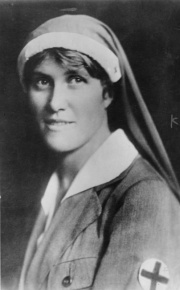 Elsa Brändström was the only neutral representative to work amongst prisoners of war (POWs) in Russia, Siberia, and Turkestan for five and a half years between winter between winter 1914 and summer 1920. POWs called her the “Angel of Siberia.” She remained committed to the POW cause into the 1930s and thereafter continued her charitable work in the United States.

Elsa Brändström (1888-1948) was born in St. Petersburg to Edvard Brändström (1850-1921), a Swedish military attaché to Russia, and his wife Anna Wilhelmina Eschelsson (1855-1913). Having grown up in Russia and Sweden, Elsa Brändström finished teacher training in Stockholm before returning to Saint Petersburg in 1908. At the outbreak of the First World War, Brändström was trained as a nurse together with Ethel von Heidenstam (1881-?), with whom she was to collaborate for many years. She looked after wounded Russian soldiers as a member of the Saint George order.

In autumn 1914, Brändström first came into contact with prisoners of war at a military hospital in Moscow. Outraged at the insufficient care the Russians accorded the downtrodden men, Brändström and von Heidenstam set out to find private donations to make up for the insufficiencies of official channels. Specifically, they wanted to provide the POWs with care packages before they were sent to Siberia.[1] When funds ran low, the two nurses volunteered to accompany the first exchange of invalid POWs between Russia and Germany, taking advantage of the trip to appeal personally to the governments of Germany and Austria for more support.

Joining Forces with the Red Cross↑

In order to continue the large-scale allocation of provisions to POWs, Brändström joined the neutral Swedish Red Cross, under whose auspices she was to conduct three trips to Siberia between October 1915 and summer 1920. On these travels, she distributed food, clothing and medical supplies to up to 700,000 POWs.[2]

The assignment proved both trying and rewarding to the young nurse. She devoted herself entirely to her work with no regard for her personal safety. Over the years, Brändström found herself in many dangerous, even life-threatening situations, notably contracting typhoid after visiting an affected camp. Showing exceptional determination wherever she went, she inspected camps thoroughly and dealt with Russian officials in an efficient manner, despite knowing only the most basic Russian at the outset.[3]

In Sretensk, a Siberian camp struck particularly hard by a typhoid epidemic, the commandant had turned a blind eye to the horrific conditions. Brändström successfully forced the commandant to conduct a complete inspection of his camp, leading to immediate measures that improved the situation drastically.[4]

Rather than limiting herself to designated tasks, Brändström was inventive and flexible, quickly reacting to the immediate needs of POWs. Thus, when large-scale use of prison labor began in spring 1916, she distributed relief workers along the railroad line and personally equipped 56,000 men with clothing within seven weeks.[5] Registering the passing men allowed her to inform the POWs’ families of their whereabouts, a task she devoted her nights to.[6]

During her intermittent stays in Europe, Brändström concentrated her efforts on POWs in designated Muscovite military hospitals, rather than being dispersed over the whole town. She continued to rally for funds in Germany, appealing to the imperial court and public alike. She also met with the families of Russian POWs, personally delivering their greetings.

Brändström's devotion to the cause of POWs earned her the nickname “Angel of Siberia,” given by the POWs themselves. They tried to repay her by sharing their own scarce food and other supplies.[7]

Countless homages rendered by POWs during and after their detention in Russia bear testimony to Brändström’s impact on their lives. Though other Red Cross nurses played a significant role in improving conditions in the camps, Brändström managed to gain the confidence of a large proportion of POWs.[8] She went beyond a Red Cross nurse's tasks of inspecting internment facilities, recommending changes, and reporting findings by responding ad hoc according to individual needs.[9] Brändström’s efficiency was characteristic of Swedish relief work in Russia during the early days of the war.[10]

Because of the Russian civil war (1917-1922), which halted the repatriation of POWs from Siberia, the Red Cross continued its relief work even after the German-Russian peace treaty. Conditions were becoming increasingly difficult and dangerous, and the assignment itself now included assembling and evacuating POWs.[11]

When Brändström embarked on her longest trip through Siberia in summer 1918, her delegation was detained for several weeks by both sides when it crossed the lines between Red and White forces. Once again, Brändström found herself in a life-threatening situation and resorted to eating her diary in order to destroy possibly compromising material.

In spring 1919, Brändström negotiated the release of a group of Austrian Red Cross commissioners imprisoned in Omsk for eight months on suspicion of espionage. In Krasnoyarsk, Brändström’s relentless efforts averted numerous death sentences after a mutiny of Russian prisoners was blamed on Hungarian POWs.

When all Red Cross delegates were urged to leave parts of Siberia threatened by the Bolsheviks, Brändström ignored the order and stayed in Krasnoyarsk, where she had been running an office with five employees. She was eventually forced to close this office and move into the large POW camp; there, she worked in the hospital. As supplies became scarce, Brändström managed to smuggle a transport of shoes and fabric from Vladivostok through the front lines of the civil war and distribute the goods among POWs quickly enough to avoid confiscation. Such an audacious course of action could not remain unpunished, and Brändström was consequently imprisoned. However, she managed to convince authorities of her indispensability as a nurse and was released soon thereafter.

Learning of her father’s ill health, Brändström finally decided to return to Sweden, where she arrived in July 1920. However, her commitment to POWs in Russia did not end with her departure. During her homeward journey, she compiled an appeal to the International Committee of the Red Cross in Geneva, informing them of the situation of POWs remaining in Siberia.[12] Back in Sweden, she appealed to the public and managed to collect enough donations to send 30,000 winter outfits to Siberia within weeks.

In 1921, Brändström first published her memoir, Among Prisoners of War in Russia and Siberia.[13] The proceeds went towards a cause to which she devoted herself for the next twelve years. Intent on supporting POWs returning from Russia, Siberia, and Turkestan, Brändström opened two institutions for their benefit: a “labor sanatorium” to train POWs to work in steady occupations such as farming or fishing, and a health resort.[14] In both institutions, men of all social strata were bound together by their common German heritage and the shared experience of imprisonment.[15]

In 1923, Brändström travelled through the US for nine months giving talks and collecting some 100,000 dollars, despite widespread anti-German sentiment, for children of POWs. With this money, she opened a retreat offering both temporary and permanent care for these children.[16] Brändström was intent on accepting only such children who “had the possibility to become first-class people,” refusing children with serious illnesses or character flaws.[17]

In 1929, Brändström embarked on her last trip through Russia and Siberia on behalf of former POWs. Concerned with their difficulty in adjusting to life in post-war Germany, she explored the possibility of their settling in Siberia, which she subsequently discouraged.[18] When France eventually restituted the funds it had failed to pay out to German POWs, the Union of Former Prisoners of War (Reichsvereinigung ehemaliger Kriegsgefangener) put Brändström in charge of distributing the sums among indigent former POWs.

Escaping Nazi Germany, Brändström immigrated to the U.S. with her husband, German law professor Robert Ulich (1890–1977), and daughter Brita Ulich. There, she continued conducting charitable work among German émigrés until her untimely death in 1948.