Howard Sweetser Bliss was the President of the Syrian Protestant College (SPC) during the war. His congenial relationship with Jamal Pasha helped to ensure the security of the college and American community throughout the war. At the Paris Peace Conference in 1919, he recommended consulting the occupants of the former Ottoman territories about which power they would prefer overseeing their Mandate.

Howard S. Bliss (1860-1920) was born in the Lebanese village of Suq al-Gharb in 1860 to Daniel Bliss (1823-1916) and Abigail Bliss (1830-1915), and spent his childhood living in Beirut and Mount Lebanon. After receiving his degree from Amherst College in 1882, he continued his studies for two years with the Union Theological Seminary and was subsequently employed as minister at the Christian Union Congregational Church in New Jersey.

He returned to Beirut in 1902 to succeed his father as President of the Syrian Protestant College, eventually implementing a number of key reforms that laid the foundation of the college’s growth leading up to the war.

Drawing on his extensive experience with the evolving missionary movement in the Near East, Bliss published a definitive redefinition of the prerogatives of missionary work in a short piece in The Atlantic entitled “The Modern Missionary.” The work, using his home institution as a primary example, called for a modern redefinition of mission work that emphasized deeds and examples over simple proselytism.

Upon the outset of the war, Bliss decided to continue the SPC’s longstanding policy of accommodation with local authorities and political neutrality. The college used its ties to the Beirut chapter of the American Red Cross to court local authorities by sending a medical mission to the Ottoman front lines during the Suez campaign.

The Red Cross mission and the college’s good standing with local authorities helped Bliss win Jamal Pasha (1872-1922) to its side. On a visit to the college in 1915, Jamal voiced his support for the SPC as an institution and offered his thanks to the college and the Red Cross for their help. Jamal also permitted the SPC to purchase provisions at the same rate paid by the army as part of his general policy towards educational and religious institutions during the war – not solely out of his high regard for Bliss and the SPC’s British dentist, Arthur Dray (1875-1926), as many have claimed.[1]

Although Bliss’ warm relationship with Jamal Pasha was frowned upon by many Americans in the Lebanese and Beiruti community, it provided him with political capital which he used to protect members of the foreign community on a number of occasions. He made a strong stand on the plan to conscript Iranian students into the Ottoman military, and after some negotiation, Jamal permitted them to remain as wards of the college. In addition to the defense of his daughter Mary Dale (1857-1930) and Arthur Dray, he relied on his political clout to defuse a series of challenges to the college’s ongoing operation. Using his relationship with Jamal, Bliss mitigated any political fallout from the United States’ entry into the war in April 1917.

In spite of the occasional tension, Bliss’ relationship with Jamal was apparently not all for show. On 11 January 1917, Bliss wrote to thank Jamal for provisioning the college with flour, to which Jamal responded by stating that it was his duty to help those who were helping his country.[2] Upon learning of the Ottoman decision to retreat from the region, Bliss, after some consultation, decided to send a warm letter expressing his gratitude for Jamal’s assistance during the war and his regret at his departure.

Following the armistice, Howard Bliss attended the Paris Peace Conference as a member of the Arab delegation. In a speech he delivered to the Group of Ten, Bliss advocated consulting the former Ottoman provinces about their wishes for the future. This notion was honored in the King Crane Commission of 1919, though its eventual impact on the delineation of Mandatory rights was minimal.

Following the Paris conference, Howard Bliss traveled to America, suffering terribly from the effects of tuberculosis. He settled in to the Sarnac Sanatarium to convalesce, eventually dying of complications from the disease on 2 May 1920. 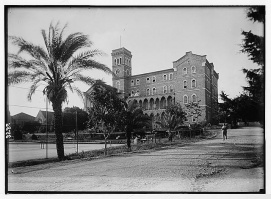 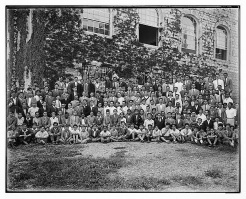