Black and Tans and Auxiliaries

The "Black and Tans" were British ex-soldiers recruited to reinforce the United Kingdom’s police force in Ireland. The "Auxiliaries" were a temporary force of paramilitary police, composed of British ex-officers. Both the Black and Tans and Auxiliaries fought against the Irish Republican Army during the Irish War of Independence (1919-1921).

In the Irish War of Independence (1919-1921), the majority of the men who died on the British side were Irish—members of the United Kingdom’s Irish police force, the Royal Irish Constabulary (RIC). By January 1920, the RIC was under continual attack from the revolutionary guerrillas of the Irish Republican Army (IRA). Besieged in their barracks, and ambushed while out on patrol, boycotted by their communities and feeling abandoned by the government, the RIC’s Irish constables began to resign and retire in large numbers. At the same time, intimidation of police recruits in Ireland made it impossible to find sufficient numbers of replacements through normal means.

In response to this crisis, the British administration used emergency measures to shore up its police force in Ireland. The first of these emergency measures was the recruitment of British ex-soldiers to serve as RIC constables, beginning in January 1920. The results of this initiative were at first disappointing, but the trickle of British recruits became a steady stream in the summer of 1920, when the RIC was given a substantial pay increase - and the stream became a flood in the autumn of 1920, when the British economy went into deep recession. After just a few weeks of police training, these British recruits were sent out to reinforce police stations across Ireland. Due to shortages of police uniforms, British constables were initially clothed in a mixture of dark police green and military khaki. It was these unusual outfits that earned them their nickname - the Black and Tans.

Meanwhile, in the summer of 1920, as a second emergency measure to reinforce the RIC as quickly as possible, the British administration created a new, temporary, paramilitary police force - the Auxiliary Division. This consisted of ex-officers who signed one-year contracts, and who were assigned the rank of “temporary cadets”. The Auxiliaries (as they became known) were formed into separate, military-style companies – fully motorised, heavily armed, and stationed at key points in the districts they policed. They also wore distinctive uniforms that were topped with a balmoral (a knitted, soft wool cap with a flat crown) or a tam-o-shanter (a wool bonnet with a pom-pom in the centre). While the Black and Tans played a static, defensive part in the conflict, defending their police stations and patrolling their districts, the Auxiliaries were a mobile, offensive force, taking the fight to the insurgent enemy.

In one important sense, the Black and Tans and Auxiliaries accomplished their mission: they provided thousands of reinforcements for the RIC, helped restore police morale, and kept the United Kingdom’s Irish police force in the fight until the truce of July 1921. But in other important respects, these emergency forces were failures. Both forces became notorious for taking reprisals in retaliation for attacks by the guerrillas: these reprisals ranged from extrajudicial killings of revolutionaries, to arson attacks on Irish homes and shops. Their violence and lack of discipline alienated moderate opinion in both Ireland and Great Britain: their critics compared them to Turkish bashi-bazouks (irregular soldiers of the Ottoman army particularly noted for their lack of discipline). As a consequence, the Black and Tans and Auxiliaries became symbols of British oppression that have endured in Irish popular memory to this day. 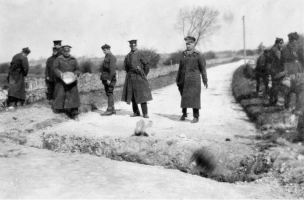 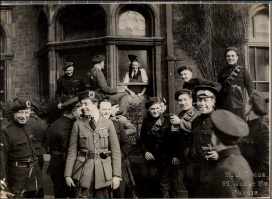 Black and Tans and Auxiliaries joking 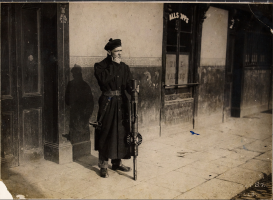 Black and Tan on duty