Batum, Conference and Treaties of

The Batum Conference (May 1918) and treaties ended the state of war between the Ottoman Empire and various governments of the South Caucasus. Additional treaties were signed with the North Caucasus. By these treaties, the empire won 20,000 square kilometers of territory and temporary dominance over Caucasian affairs.

Following the October Revolution, the Caucasus entered a period of political uncertainty. In the South Caucasus, the major ethnic groups had formed an autonomous provisional government led by the Transcaucasian Commissariat (executive) and the Transcaucasian Seim (legislature). The North Caucasus, meanwhile, saw the emergence of several political projects embroiled in conflict. The most clearly articulated of these was the Union of Allied Mountaineers, a poly-ethnic organization that claimed the status of autonomous government. Under the Treaty of Brest-Litovsk (3 March 1918), Soviet Russia had agreed to evacuate the “Three Districts” of Kars, Ardahan, and Batum (Batumi), paving the way for these districts’ takeover by the Ottoman Empire. The provisional government of the South Caucasus, however, refused to recognize this treaty, meaning that a de facto state of war continued between the Ottoman Empire and the South Caucasus. Beginning on 14 March 1918, delegations of the provisional South Caucasian government and the Ottoman Empire met in Trabzon to fix the fate of the “Three Districts”. Facing South Caucasian delegates’ continued refusal to recognize the Treaty of Brest-Litovsk, however, the Ottoman government authorized an occupation of the “Three Districts”, which had been Ottoman territory until 1878. The Ottoman army occupied Batum by 14 April. That same day, the South Caucasian government withdrew its delegation from Trabzon and began mobilizing against the Ottoman army. On the night of 22/23 April, the South Caucasian government declared formal independence from Russia, soon forming the Transcaucasian Democratic Federative Republic (TDFR).

The Conference of Batum↑

On 23 April, Akaki Chkhenkeli (1874–1959), the leading official of the TDFR, informed the Ottomans of his government’s intent to recognize Brest-Litovsk as a basis for peace and agreed to talks in Batum. Chkhenkeli led the TDFR delegation, while the Ottoman delegation was headed by the empire’s minister of justice and acting foreign minister, Halil Bey (Menteşe) (1874–1948). They were joined by a North Caucasian delegation under Haydar Bammat (Gaĭdar Bammatov) (1889–1965) and a German observer mission under Otto von Lossow (1868–1938). While the TDFR assumed that Brest-Litovsk would provide the basis for a peace treaty, the Ottoman delegation had instructions from its government to demand the cession of territory beyond the “Three Districts” and conditions that would turn the TDFR into an Ottoman protectorate. On 11 May, the Conference of Batum convened for its only official session. First, the North Caucasian delegates were admitted to the conference. Second, the Ottomans presented their new demands to the shocked TDFR delegation. Thereafter, negotiations continued for two weeks through an exchange of notes. From early May, the Ottoman army had been preparing for another advance into the South Caucasus as a means of imposing its demands. Upon the TDFR’s refusal to accept Ottoman conditions, the Ottoman army launched its advance on 15 May. While the Ottoman army took Aleksandropol’ (Gyumri) within days, Armenian resistance in a series of battles between 21–29 May, especially at Sardarapat, halted the advance. On 26 May, in the face of failed talks, Georgia declared its independence, dissolving the TDFR. Azerbaijan and Armenia gained independence on 28 May. Each new republic continued bilateral negotiations with the Ottoman Empire in Batum. Talks with the Armenian delegation under Aleksandr Khatisyan (1874–1945), the Georgian delegation under Noe Ramishvili (1881–1930), and the Azerbaijani delegation under Mehmet Emin Resulzade (1884–1955) took place between 29 May and 3 June.

The Treaties of Batum↑

On 4 June, the Ottoman delegation signed treaties of peace and friendship with Armenia and Georgia, and a treaty of friendship with Azerbaijan; it signed a similar treaty with the North Caucasian delegation on 8 June. Supplemental treaties with all signatories allowed the Ottoman military to utilize these countries’ infrastructure. The treaties between the Ottoman Empire and Armenia, Azerbaijan, and the North Caucasus authorized the empire to send military assistance upon the request of the Caucasian signatories and pledged good relations and defined a new Ottoman border. Georgia was to demilitarize its Black Sea fleet, while Georgia and Armenia were additionally obliged to demobilize their armies for the remainder of World War I. Protocols regulating trade and border crossing accompanied the Ottoman treaties with Armenia, Azerbaijan, and Georgia. Two further protocols with Armenia and Georgia dealt with the status of Muslims living in those countries and prisoners of war, respectively. Finally, an agreement signed between Azerbaijan, Georgia, and the Ottoman Empire on 4 June regulated the use of the Baku-Batum oil pipeline.

The Ottoman Empire had achieved most of the aims set out by the government in early May. In Georgia, the empire acquired territory nearly up to its 1828 border. Farther south, it expanded as far as Nakhichevan, thus obtaining a common border with Azerbaijan. It also obtained the Kars-Julfa railroad, which it hoped to use against British interests in northern Iran. All Caucasian republics acquired formal recognition, while Azerbaijan and the Union of Allied Mountaineers in the North Caucasus won the prospect of Ottoman military assistance. Meanwhile, the loss of territory and infrastructure pained Georgia and devastated Armenia. Following the treaties of Batum, Ottoman and Armenian delegates continued to meet in Aleksandropol’ to clarify the resolution of the war. Here, the Ottomans pushed for control of a “northern corridor” through Armenia. The Ottomans abandoned this strategy in early October, following the capture of Baku. Anticipating the war’s end, the Ottoman government ordered a withdrawal from all territories won at Batum from 24 October; this was confirmed by the cease fire at Mudros on 30 October 1918.

Though they never came into force, the Treaties of Batum enabled significant Ottoman expansion in the final months of World War I. Territorial gains and the approval of Ottoman military mobilization across Caucasian territory made possible the successful advances on Baku that summer and to Dagestan in October. For some, the events of 1918 signify the Ottoman government’s pursuit of pan-Turkism or pan-Islamism. Yet as Operation Faustschlag demonstrates, the Ottomans were not unique among the Central Powers in attempting to take advantage of the power vacuum opened by Russian withdrawal from the war. Germany also took an interest in the Caucasus and cultivated a close relationship with Georgia during the proceedings at Batum. Thus, the conference also sparked a rivalry between the two wartime allies, Germany and the Ottoman Empire. Finally, the events in Batum were significant for the Caucasus. The Union of Allied Mountaineers found at Batum an opportunity to obtain recognition and discuss joining the TDFR. For the South Caucasus, disagreements on how to react to overwhelming Ottoman military force, along with the prospect of German support, accelerated the establishment of independent Armenia, Azerbaijan, and Georgia. 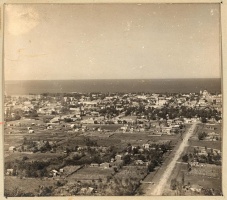