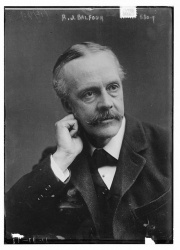 Arthur James Balfour was a British Conservative politician and statesman who served as Prime Minister of the United Kingdom and was later Foreign Secretary. In the latter post, he issued the Balfour Declaration of 1917 on behalf of the British government, which endorsed Zionist aspirations in Palestine. He received an earldom in 1922.

Arthur James Balfour, Earl of Balfour (1848-1930), was the son of a wealthy businessman, James Maitland Balfour (1820-1856), while on his mother’s side he was descended from nobility. His mother was Lady Blanche Mary Harriet Gascoyne-Cecil (1825-1872), second daughter of James Gascoyne-Cecil, Second Marquis of Salisbury (1791-1868) and sister of Robert Cecil (1830-1903), leader of the Conservative Party, Foreign Secretary, three time British Prime Minster, third Marquis of Salisbury and her eldest son’s mentor and political benefactor.

Arthur attended Eton and later studied at Trinity College, Cambridge, where he read moral sciences, graduating in 1869 with an average second class honors degree. More devoted to sports (canoeing and tennis) than to learning, he nevertheless cultivated an interest in philosophy (abstract theorizing as he called it). He speculated, lectured and wrote about philosophy, in the process publishing a handful of works. His books appear to have been noticed by specialists in the field, provoking some controversy, but registering no lasting impact. As a clever amateur philosopher he exhibited intellectual agility, but his importance was ephemeral during both his lifetime and thereafter. As a politician, his role was more enduring.

Although he affected indifference towards politics, he actually spent most of his life working within the political realm. According to one calculation, he spent fifty-five years in Parliament, more than once as majority leader of the Conservative Party in the House of Commons or in opposition. During that time he assumed a variety of ministerial appointments, ultimately succeeding his ailing uncle to the leadership of the party and to the post of Prime Minister (1902-1905). Despite his long tenure in Parliament, his role as statesman in British historiography tends to be either overlooked or under-rated, probably because his shortcomings as party leader and Prime Minister far outweighed his successes.

His successes include the Education Act (1902), the creation of the Committee of Imperial Defense (1903), and the sealing of an Entente Cordiale (1904) with France. In time, all these developments were to have considerable bearing on Great Britain’s subsequent social, military, and diplomatic affairs. However, they could not compensate for his inability to chart clear policies, to maintain unity in the ranks of his fractious party, or to gain support from a rapidly changing popular constituency. In December 1905 he submitted his resignation as Prime Minister. In the following year (1906), he led his party to a resounding electoral defeat; his repudiation by the public was eventually followed by the repudiation of the Conservative Party for his mishandling of the great constitutional controversy that gripped Great Britain in 1911.

More on account of his experience than due to his actual achievements, he was returned to office by the first coalition war government, headed by Herbert Henry Asquith (1852-1928). Appointed First Lord of the Admiralty, he replaced the discredited Winston Churchill (1874-1965) following the failure of the Dardanelles Campaign. Under David Lloyd George’s (1863-1945) second coalition government, Balfour was made Secretary of State for Foreign Affairs in 1916. By that time, the political fate of the Middle East had been greatly influenced as a result of the outbreak of the Arab revolt in the Hejaz (at least partially engineered by Great Britain), as well as by the notorious Sykes-Picot Agreement. Balfour, however, had a late say in the destiny of the region when, in 1917, he issued the conflicted declaration, carrying his name, favoring the establishment of a Jewish national home in Palestine. Subsequently he used his pervasive influence to include that declaration among the terms governing the operation of the British Mandate in Palestine, thereby conferring upon it a semblance of legality. 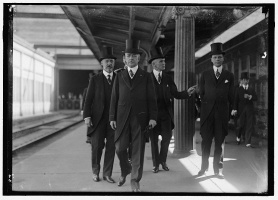 British Mission to the United States 1917