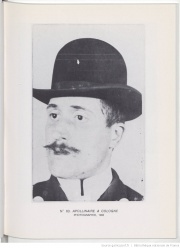 Although he actually died of Spanish influenza, the trepanned avant-garde poet was the embodiment of France’s “head wound”. Apollinaire’s letters to the woman he loved during the war, Lou, have become a prime example of war literature.

When poet Wilhelm de Kostrowitzky, alias Guillaume Apollinaire (1880-1918), voluntarily enlisted he did so in a frame of mind similar to many soldiers; his work as a writer and journalist helped define the public face of the war.

Apollinaire expressed his unfailing patriotism in his letters, poems and caligrams. Destabilized by his stateless status, the war convinced him that it was time to become a French citizen. The play-on-words Obus-roi summed up his war experience from his arrival at the front in March 1915 until he was wounded.[1] An artilleryman, then an infantry man “incredibly happy to be at the front”, Apollinaire discovered that fire wounded, killed and traumatized. Wounded to the head in March 1916 and trepanned, the poet, who worked as a censor, remained mobilized in his writing.

He leveraged his war wound to help legitimize the avant-garde movement through his extremely active literary activity in Paris; he coined the word surrealism in the programme notes for the opening of Parade, the 1917 ballet creation by Pablo Picasso (1881-1973), Erik Satie (1866-1925), Sergei Pavlovich Diaghilev (1872-1929) and Jean Cocteau (1889-1963). His subtle oxymoron “Oh God, what a lovely war” was rather unsettling. He died of Spanish influenza in 1918 and was buried on 13 November in a victorious Paris busy jeering the recently deposed Wilhelm II, German Emperor (1859-1941). In the minds of many, only his wound to the head - the site of his genius - could have triumphed over the great writer “dead for France”; the numerous portraits by his artist friends have been influential in his being remembered this way.