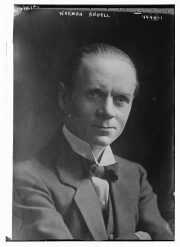 Norman Angell was the pen-name used by Ralph Norman Lane (1872-1967), production manager of the continental edition of the Daily Mail, for his best-selling book, The Great Illusion (1910), the principal argument of which was that even if an invading Germany seized all the gold in the Bank of England it would lose "a thousand" times more than it gained because the interdependent financial system would collapse like "a house of cards". This proto-globalist assertion was one to which some British conservatives hoped their fleet-building German counterparts would pay heed; so, with the support of former prime minister Arthur Balfour (1848-1930) and Reginald Baliol Brett, Viscount Esher (1852-1930) of the Committee of Imperial Defence, a British industrialist, Sir Richard Garton (1857-1934), set up a foundation to support Angell, who adopted his pen-name as his everyday identity on becoming a full-time international-relations pundit in 1912 (and legally registered himself by deed poll as Ralph Norman Angell in 1920). To please his conservative backers and distance himself from the peace movement, Angell claimed that until his thesis was accepted on all sides he would not cut Britain’s defence budget "by a single sovereign". But he had unwisely put forward a second and more contentious argument: that, because economic activity (and therefore wealth) inhered in individuals rather than in territories, the acquisition of new territory brought no benefit to a country. This, as he later sometimes admitted, had pacifist implications (since the corollary was that territorial surrender incurred no costs to a country, whereas territorial defence did). Angell was quick-witted but of limited education; and his career as a public intellectual was marked by notable inconsistency.

The unresolved tension between pro- and anti-defence strands in his thinking, already detectable in The Great Illusion, became even more apparent after Austria-Hungary declared war on Serbia on 28 July 1914. Angell’s energetic eight-day campaign for British neutrality won him the admiration of many on the left, though it ended in failure on 4 August. Six days later, he helped Ramsay MacDonald (1866-1937) and other neutralists found the Union of Democratic Control, which called for a post-war settlement without annexations and indemnities. And during 1915-1916, he privately contemplated putting himself at the head of a British pacifist movement, though in the end he held back from this. Yet at the same time he publicly declared his support for defeating and disarming Germany, and during two spells lecturing in the United States (May 1915-May 1916, and July 1917-December 1918) came first to advocate and then to endorse American entry into the conflict, his writings being read approvingly by President Woodrow Wilson (1856-1924). In the summer of 1917, having just declared his support for a League of Nations, he also endorsed socialism. He thus achieved the remarkable feat of being widely regarded during the First World War as an opposition-minded isolationist in Britain but as an administration-friendly interventionist across the Atlantic.

By the end of that war, his leftward political move had dented his remarkable pre-1914 popularity with the general public; but for the next half-century he remained a respected figure, still in demand for lecture tours of the United States, serving as Labour MP for Bradford North (1929-1931), being knighted in 1931, helping to lead the influential pressure group the League of Nations Union throughout the 1930s, and winning the Nobel Peace Prize for 1933. However, his effectiveness as a campaigner for collective security and against appeasing the dictators was compromised by his habit of claiming that in his heart of hearts he preferred the pacifist policy of non-resistance, though he knew the public would not accept it, and so advocated collective security as a second best (because it was both politically practicable and preferable to the anarchy of go-it-alone national security policies). From 1939, however, he dropped his claims of personal pacifism, and was to deny in his memoirs that he had ever taken this position, just as he omitted all reference to the disastrous marriage he had contracted in 1899, though his estranged wife lived until 1955. He spent the 1940s in the United States as, in effect, a free-lance propagandist for British foreign policy. Thereafter, after returning to Britain in 1951, his star steadily waned; but he lived until almost the age of ninety-five, a diminutive, solitary, Spartan, and increasingly conservative figure. Since his death, he has gained some academic recognition as a pioneering theorist of globalism.