The diffusion of anarchism in Latin America, which began in the 1870s, was boosted by large migration flows. Between 1890 and 1920, anarchism was an essential element in the process of workers’ self-organization. Opposition to the war characterized the Latin American anarchist movement during the years of conflict.

Anarchism in Latin America began in the 1870s with workers’ organization, propaganda, and educational and community experiments. Between 1890 and 1920, anarchism was an important element in the process of workers’ self-organization and in the construction of class cultures.

Anarchism, given its radical opposition to liberal democracy, seemed ideal for workers excluded from democratic mass participation, in many cases not only as workers but also as foreigners. The Latin American states, characterized by oligarchic republican governments with a historical tradition of repressing popular movements, indigenous communities and slaves, contributed to the spread of anarchism’s radical direct action.

The anarchist movement in Latin America was an established and often predominant feature within the workers' associations, particularly in Brazil, Argentina and Uruguay, countries that experienced intense and constant immigration. Anarchism, however, was not simply an expression of foreign-born militants, as local governments often claimed in their strategies of repression. Despite the undeniable foreign influence, anarchism resulted from the circulation of ideas and experiences between Europe and America and between the Americas, a construction in which transnational elements and local processes were as important as the "imported" ones.

In Argentina, Uruguay and Brazil, libertarian groups, activists, unions and newspapers emerged in slightly different moments. At first only a sporadic phenomenon in the early 1890s, anarchism gradually transformed into a powerful catalyst of urban workers’ organization processes. The first decade of the 20th century was the high point of this anarchist primacy in these countries’ workers’ movements. The Argentine Regional Workers’ Federation (Federación Obrera Regional Argentina, FORA), a trade union created in 1901, explicitly stated adherence to anarchism until 1915. In Brazil, the first trade union, the Brazilian Workers’ Confederation (Confederação Operária Brasileira, COB), which ran between 1908 and 1915, had many anarchists among its most active leaders. The explicit anarchist characterization of the national trade union federations only emerged in Argentina and Uruguay (Federación Obrera Regional Uruguaya), while in Brazil it was limited to the Local Workers Federation of Santos in the country’s main seaport.

During the 1910s, the anarchists militated alongside the more pragmatic revolutionary syndicalism movement, a movement they themselves had helped create in the middle of the previous decade. In the 1920s, the anarchist movement progressively reduced to a network of more restricted circles and newspapers focused almost exclusively on propaganda. Anarchists still remained connected to the activities of trade union organization, but in a position inferior to the revolutionary syndicalists, socialists and communists.

In these decades, the anarchist movement also had very active groups in Mexico, Chile, Cuba, Peru and Paraguay, but it was more episodic and sporadic than in other Latin American countries.

With the outbreak of World War I, anarchists proclaimed a firm pacifist position in all Latin American countries; opposition to the war and its aftermath defined them during this period. They considered themselves part of an international peace movement and endeavored to shape public opinion against war, militarism and nationalism, influenced by anarchist Sébastien Faure’s (1858-1942) pacifist campaign in France.

Although far from the theater of war, the war affected these countries in different ways. Thousands of immigrant workers were summoned to return to their country as soldiers. The war raised food prices, which severely affected the workers, whose wages did not increase proportionately. With the intensification of industrial production, working hours were extended. So, it was a period of significant increase of partial and general strikes, led by or involving significant participation of anarchists groups, militants and unions.

In Argentina, the number of workers striking rose from 12,000 in 1915 to 136,000 in 1917. The anarco-syndicalist FORA of the fifth Convention, born in 1915 after the FORA divided into two parts, retained its strength, in spite of the greater new revolutionary-syndicalist FORA.

In Brazil, in 1917 the São Paulo anarchists promoted an Anarchist Alliance to organize anti-war demonstrations. The alliance united more than thirty organizations, and at the same time launched a major campaign against inflation and deteriorating living conditions. Strikes for salary increase multiplied. Some of the demonstrations ended with assaults on food deposits. The repression was brutal: the police killed about 200 workers.

In Cuba, because of the war, many tobacco factories closed and many workers became destitute. A committee formed by anarchists organized a so-called Hunger March. Strikes, with the anarchists’ support, mushroomed all over the country, demanding salary increases and a decrease in food prices. The cost of living also increased manifold in Peru and Chile and the unions, led by anarchists, promoted campaigns for cheaper food.

In Mexico City, a very strong general strike led by anarcho-syndicalists of the Casa del Obrero Mundial (House of the Industrial Worker of the World) took place in 1916.

Although some important anarchist leaders as Prince Pyotr Alexeyevich Kropotkin (1842-1921) and Jean Grave (1854-1939) were in favor of intervention in the conflict, most anarchists in Latin American countries maintained a posture of intransigent internationalism, pacifism and radical critique of the war.

In Argentina – with the exception of some famous anarchist intellectuals, like the educator Julio R. Barcos (1883-1960) and the later ideologist of the Argentinean right-wing nationalism of the 1920s and 1930s, Juan Emiliano Carulla (1888-1968) – the anarchist movement took a strong anti-war position. This sentiment was held from the ancient militants all the way down to the young ones, like Juan Lazarte (1891-1963), whose La locura de la guerra en América (1932), the primary Latin American anti-militarist work, had its origins in his First World War pacifist considerations and militancy. Already in 1914, the FORA published a declaration against the war. The main anarchist newspaper, La Protesta, began a successful neutralist and anti-militarist campaign continuing until the end of the conflict, later joined by the important Uruguayan anarchist journal La Batalla. Anti-nationalist and anti-militarist action had a very concrete meaning in these countries, where half of the economically active population was composed of strangers from European countries involved in the war. A anarchist journal written in Italian, La Rivolta, was published in 1917 in Argentina specifically with this anti-nationalist aim.

In Brazil, the anti-war campaigns were very intense too. On May Day 1915, anti-war committees founded by anarchists, along with the COB, organized large anti-war demonstrations in Rio de Janeiro and São Paulo, where the most important anarchists, like Edgard Leuenroth (1881-1968), joined the group of speakers.

When Italy entered the war, Brazilian anarchists directly criticized the revolutionary syndicalist Alceste De Ambris (1874-1934) and the socialist Benito Mussolini (1883-1945) for supporting entry into the war. In 1916 in São Paulo, where Italian immigrants formed the greatest ethnic group within the workers, the major anarchist newspaper Guerra Sociale published a text by the Italian anarchist Errico Malatesta (1853-1932) in which he disagreed with the interventionists. When this newspaper was founded in 1915, the Italian anarchist Luigi Damiani (1876-1953), who lived in Brazil between 1898 and 1919, wrote that the name Guerra Sociale (social war) symbolized the libertarian opposition to war as well as the hope and certainty of a revolutionary end to World War I.

Latin American anarchists argued that war was determined by the antagonism of capitalist interests and was a factor in consolidating the states. They only advocated revolutionary violence in Mexico, where Ricardo Flores Magón (1874-1922) continued the struggle in order to give a libertarian meaning to the Mexican Revolution.

In 1915, Mexican anarchists made a deal with the Carranza government for military support and formed battalions, which were dissolved in the following year. After the U.S. entry into the war in April 1917, Flores Magón published a manifesto asking the people to rebel against the war of the oppressors and start a revolution. He was one of the first to explain that U.S. involvement only revealed the dawn of the American capitalist imperialism on the international scene. In Cuba, the anarchist press was outlawed and many foreign anarchists were expelled.

Brazil’s entry into the war (October 1917), the only Latin American country to participate in the conflict, did not stop the anarchists’ anti-war campaign. In the context of great demonstrations and strikes, the anarchists tried to organize an uprising in Rio de Janeiro in 1918, but were severely defeated. That same year, Flores Magón was sentenced to twenty years in prison in the U.S. for his anti-war position and for criticizing the country’s entry into the war.

A number of factors explain the intensity of the agitations of those years. World War I and its consequences were certainly among the most important. 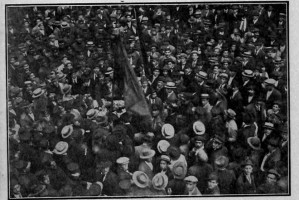