World War I is often considered to be the war that shaped early military aviation. When the conflict started, heavier-than-air flight had only been in existence for a little over a decade. Most aircraft of 1914 were only a few technological steps removed from the original Wright Flyer, but the pressing needs of combat rapidly sped up aircraft development. Over a very short period, engineers on all sides worked towards increasing speed, maneuverability, robustness, altitude, and range in each succeeding design. Just as with fighter aircraft, bomber and reconnaissance models evolved rapidly as the war progressed. The key to both missions was a sturdy and reliable design capable of carrying observers or bombs over long distances. Therefore, a series of rugged airframes served as multi-mission aircraft conducting both reconnaissance and bombing missions.

Early in the war, all nations suffered from mediocre aircraft designs that lacked the range, speed, and reliability of later generations. The one element these early aircraft did have in common was stability. Despite their seemingly flimsy construction of wood and fabric, aircraft like the British B.E.-2a and Avro 504, the French Blériot, and the German Taube were relatively easy to fly and could safely spirit a pilot, and sometimes an observer too, well behind enemy lines and back again. In this early stage of the war, these designs provided “eyes on the enemy” and helped direct artillery fire. Yet, just as some pilots began to bring pistols, rifles, and machine guns into the air to target enemy pilots, so too did other aviators envision directly affecting the ground war. The stability and range of these B.E.-2s, Avros, Blériots, and Tauben proved useful not only in observing the enemy, but also in dropping small bombs on them.

Attrition from the Air↑

By late 1915, the development of early fighter aircraft like the German Eindecker and French Nieuport proved the need for a new generation of reconnaissance and bomber aircraft capable of carrying larger cargos over long distances while defending themselves. As with the early war models, the same aircraft design was often used for reconnaissance or bombing, depending on mission requirements. The British Sopwith 1 1/2 Strutter, the French Voison VIII, and the German Albatross C series became the workhorses of their respective air forces, conducting reconnaissance, artillery spotting, interdiction, and early versions of long range bombing. Each nation’s own vision of airpower decided these roles, with the French launching long range bombing missions with their Voisons, while the Germans tended to use their Zeppelins for this role, sending their AEG bombers on more tactical missions.

As the war settled into the long grinding attrition battles of 1916, aviators began to look for a way to strike at the heart of the enemy far beyond the trenches. In this period, reconnaissance and bomber design evolved along two distinct tracts. The first involved the continued development of short to medium range aircraft for tactical reconnaissance and interdiction missions. Aircraft like the British DH9, French Breguet, and German Rumpler combined ruggedness and increased power to help pilots succeed in the increasingly dangerous skies over the frontlines. The second development tract focused on very long range aircraft for conducting strategic reconnaissance and bombing missions deep within enemy territory. Aircraft like the French Caudron, British Handley-Page 0/100, Italian Caproni, and German Gotha and Giant took over these missions starting in 1917.

While these long range designs initially proved successful, it was not long before they started taking unacceptable losses in the skies over London and Germany. Both sides slowly turned to night bombing and started work on a new generation of long range bombers for the planned campaigns of 1919. Aircraft like the four-engine British Handley-Page V/1500, with a range long enough to reach Berlin, and the six-engine German Siemens-Schuckert RVIII hinted at a new type of war in which aircraft could fight through defenses to directly bomb any enemy city. Yet, World War I ended before they could be tested in combat, leaving the prospect of long range strategic bombing to future generations. 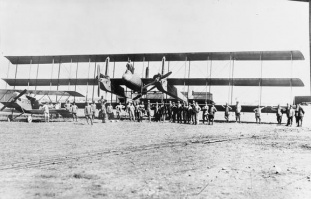 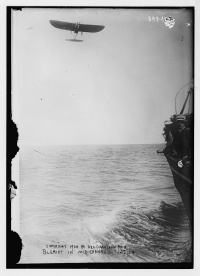 Blériot XI over the English Channel 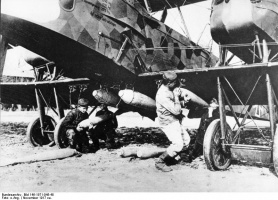