Named for its author, the German minister of foreign affairs Arthur Zimmermann, the so-called Zimmermann Telegram threw a disturbing light on German wartime diplomacy in Mexico and it catalyzed the United States' entry into the First World War.

Press outlets around the world published the diplomatic correspondence between the German foreign office and its representative in Mexico on 1 March 1917, causing a major earthquake in public opinion worldwide. Arthur Zimmermann (1864–1940), the German minister of foreign affairs, authored the note and forwarded it to Mexico via the embassy in Washington. The British Secret Service deciphered it and found that it contained alarming news: Germany, after returning to unrestricted submarine warfare that February, was willing to join forces with Mexico should the United States decide to enter the war on the side of the Allies. In that case, Germany wanted to generously support the Mexicans and offer them Texas, New Mexico, and Arizona as war booty. Japan was to be invited to join the alliance as well. Mexican President Venustiano Carranza (1859–1920) rejected the offer, which would have meant leading a suicidal war against the overpowering United States. Carranza, however, tried not to be harsh with the German representative because he wanted to keep the possibility for further cooperation alive.

Contemporaries and historians have, since the moment of its publication, wondered about the motives for Zimmermann’s incredible blunder, which he admitted publicly on 3 March 1917. A closer look at the German-Mexican secret rapprochement in 1915–1916 is necessary to understand it. Already in 1915, Carranza himself had confidentially explored the possibility of cooperation with Germany in an initiative against neighboring Guatemala and British Honduras. The negotiations were continued in 1916 and a military joint action remained on the agenda. At some point the Mexican side suggested an action against the United States. Zimmermann implicitly built upon these negotiations in his telegram. In addition, in 1916, the German Empire had already looked for closer ties to Japan, which stood in antagonism to the U.S. - much like Mexico, albeit for different reasons. There were Mexican-Japanese talks about cooperation, too. Thus, Mexico became an important hub for Germany’s global strategy during the war.

In the United States, the publication of the telegram at first caused disbelief. A majority believed it was yet another forgery of Allied propaganda. When Zimmermann himself, however, confirmed its authenticity, Americans were outraged. The Zimmermann telegram contributed to changing public opinion in the U.S. and preparing it for entry into the First World War a few weeks later. 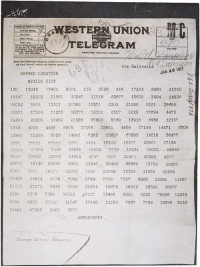 Zimmermann Telegram as received by the German Ambassador to Mexico