The two Moroccan crises represent the product of “rapacious joint imperialism.” Morocco could not escape the ambitions of its immediate neighbours, Spain and France, who secretly plotted to divide the country between them in 1904. The Reich provoked lively international reactions both in Tangier in 1905 and in Agadir in 1911.

The two Moroccan crises of 1905 and 1911 reveal the extent to which “predatory shared imperialism” degenerated into rivalries dangerous for global stability. This trend was initiated in the Far East in the 1840s and 1850s and lasted until the international expedition in 1900 against China. The Colonial Conference in Berlin in 1884-85, focusing on Africa, made the imperialistic strategy official. This and other meetings, such as the one in Madrid on Morocco (1880) and in Brussels on the Congo basin (1890), authorized the conquest of the hinterlands by the pre-established colonial powers on the coasts. In 1902, France and Spain – partners in Africa since June 1900 and acting secretly without the other powers’ knowledge – attempted to divide Morocco between themselves, albeit unsuccessfully. It was not until the contentious Franco-British Entente Cordiale of 8 April 1904 – which stipulated a place for Spain in Morocco – that Franco-Spanish negotiations continued, ending in a secret agreement on 3 October 1904. This agreement set relatively well demarcated zones in case of established anarchy. A public statement announced that the agreement had been reached, and shortly afterwards a Spanish diplomat disclosed the agreement’s essence to the German Embassy in Madrid. Wilhelmstraße, the German state chancellery, alerted Wilhelm II, German Emperor (1859-1941) of the poorly concealed territorial division that would henceforth be sponsored by London. It was no secret that the Reich eagerly wanted to occupy the prime location in northwest Africa where the Atlantic Ocean met the Mediterranean. Taking advantage of the Japanese defeat of France’s Russian ally, Berlin decided to act. The Imperial Yacht made a brief stop in Tangier on 30 March 1905 and read a statement from the Kaiser to Moroccan authorities, underlining Germany’s "altruistic" attachment to Moroccan sovereignty and to free commerce.

In the midst of media-related tension – Paris and Madrid had signed another secret agreement at Saint-Sebastian on 1 September 1905 – a conference was finally called in Algeciras in January 1906. Building upon the first conference on the protection of foreigners in Morocco, held in Madrid in 1880, the Algeciras conference’s final act on 6 April 1906 gave two of Morocco’s neighbours the right to police and military training in eight strongholds. These were, paradoxically, intended to ensure Morocco’s claimed sovereignty. The distribution of roles during the conference revealed the extent to which conflict was brewing between the two blocks. With the quiet support of Saint Petersburg and Rome, the Paris-Madrid-London trio prevailed over the Berlin-Vienna-Morocco trio. The group of imperialistic powers was breaking apart. This general feeling of separation was confirmed in May 1907 by the signing of a triangular agreement between London, Paris and Madrid concerning the disguised protection of Spanish possessions between the Atlantic and the Mediterranean. The policy behind the incidents in Marrakech and Casablanca then allowed the two regulating countries to push their pawns in a coveted empire into a permanent civil war. The retreat of German legionnaires in Casablanca in 1908 revived the simmering tension.

However, demonstrating that no situation is irreversible, Paris and Berlin signed an economic partnership agreement in Morocco in February 1909. This text, which had scarcely any real consequences, was designed to scare Madrid, who believed in an exclusive Franco-Hispanic collaboration in this region. The failure of a unilateral Spanish penetration around Melilla a few months later accentuated the general unease surrounding Morocco. The secret regime of Moroccan agreements between Paris and Madrid was becoming unsustainable. Furthermore, when the French from occupied Casablanca had to intervene in Fez in April and May 1911 to save the sultan, threatened by an umpteenth tribal revolt, the Spanish authorities were persuaded that Paris was acting behind their back in accordance with Berlin. Spain decided in early June 1911, without consulting France, to occupy Larache and its hinterland on the Atlantic coast, south of Tangier. German diplomacy concluded that Paris and Madrid had formed an alliance to share the country between themselves, which was both true – the agreement from 1904 remaining secret – and false in terms of the operations coordination at the time. Berlin thus sent the gunboat Panther into the Agadir Bay on 1 July 1911.

The situation was one of extreme paranoia. Each of the protagonists believed it was being deceived by the other with the third. These assumptions were nothing more than imagination. In the end, negotiations were made, since Paris was not prepared to enter a war. Despite its repeated requests to the French, German and British governments, Spain, considered a secondary partner, was excluded from the discussion in Berlin. The atmosphere was war-like in the media agencies on both sides of the Vosges. Within the French government, there was even fear that a new front could be established in the Pyrenees. This fear of being surrounded was not only felt in Berlin, but also in internationalist and socialist circles, headed by Jean Jaurès (1859-1914). These circles increased the number of demonstrations against the excesses of a system that had been considered under control – if not acceptable – since Berlin 1885. While “rapacious imperialism” certainly determined communally-chosen targets – a sort of common program – it did not guarantee harmony among the assailants.

The resolution of the crisis on 4 November 1911 not only relieved the chancelleries and military staff, but also the media, the mirror distorting concerned public opinion. France and Spain were henceforth free to conduct their final negotiations, since their previous secret agreements – the 1902 plan as well as the 1904 and 1905 texts – had been made public by the press in the wake of the agreement signed in Berlin. Italy had in the meantime attacked the territories of Cyrenaica and Tripolitania, vassals of the Turkish Empire. This anti-Ottoman atmosphere of imminent defeat would push the small Balkan powers to follow suit the year after. This came after Paris and Madrid finalised the division of Morocco – Tangier excepted – in a treaty signed in Madrid on 27 November 1912. This followed rather fierce discussions that would impact issues such as the policy of Spanish neutrality that was adopted in August 1914.

This general atmosphere of aggression would severely weaken the cautionary reflexes of the major powers’ leaders. More than the machinery of alliances or ententes, more than a single crisis (Morocco 1905-1906), the succession of crises (Bosnia 1908), Agadir, Libya (1911-1912) and Balkan Wars (1912-1913) explain this atmosphere, without rendering inevitable the assassination of Sarajevo and its aftermath. 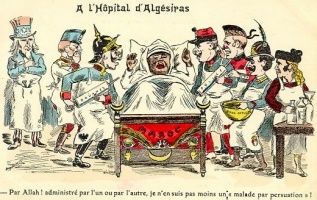 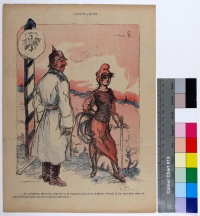